Services at the farm

The Peaceable Kingdom. In 1834, a Quaker called Edward Hicks painted a scene of lions, cheetahs, cattle, goats, a bear, some lambs and three languorous children, all sprawled on the edge of a forest. They seem contented, quiet, mindful of and comfortable with one another. Harmony and respect seem to quietly bind the scene. 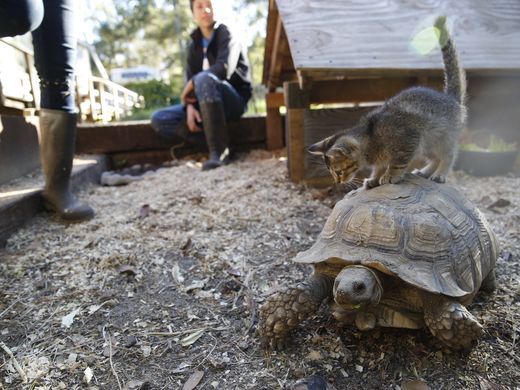 That is the atmosphere one finds at Redemptive Love Farm, just outside Tallahassee. Heading north on Centerville, past Pisgah Church Road and the mansions that have sprung up on horse farms and old hunting plantations, where painted white fences and impressive gates define the difference between country and country gentry, you can watch that schism deepen. Soon, the big houses become small; soon mobile homes sprout, and 20-person cemeteries alongside the road mark the places where members of the many old black enclaves still rest.

It is literally in “this neck of the woods” that a husband, a wife, brought their seven adopted children, their nearly 100 animals (counting the chickens and the ducks) and decided to live according to Biblical principles that hold that love, generosity, and the Golden Rule bring riches beyond price. But it wasn’t always like this. 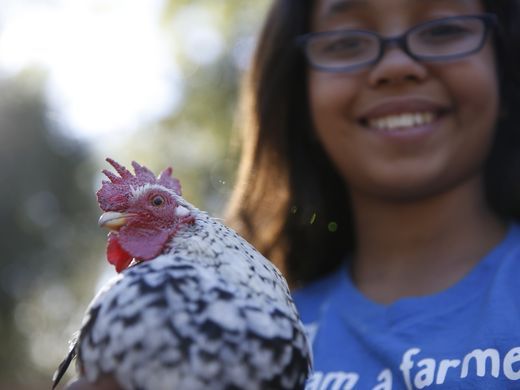 Shannon Carroll and her husband Brian had met when they both worked at Chick-fil-A. “I was just a girl from Orlando, raised on TV, video-games, and all things Disney. Seventeen years old… and leading a pretty boring life,” Shannon laughs. But, tall and pretty, in her, Brian Carroll knew he’d found the girl he wanted to marry. 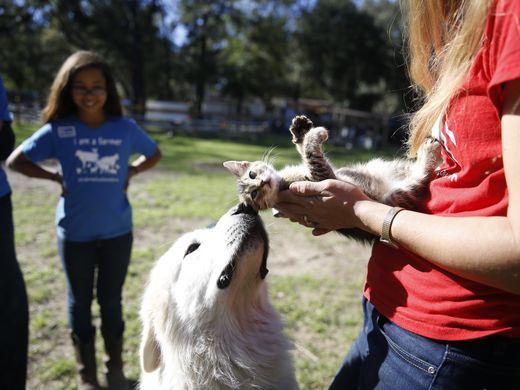 Sitting at a picnic table outside the mobile home which the Carrolls now share with children ranging in age from 6 to 15, Shannon looks over her “kingdom.” “Boring” is not a word that could be used at Redemptive Love Farm. 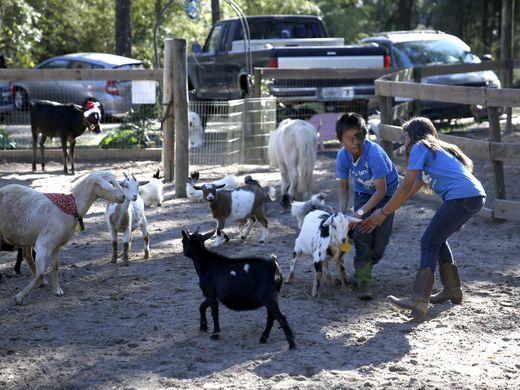 A firetruck is in the foreground next to an old school bus that will one day be a mobile petting zoo; the trailer is circled by open-air pens and stalls holding llamas, alpacas, cows, horses, goats, rabbits, chickens, a donkey and a peacock, who all seem to be engaged in conversation. 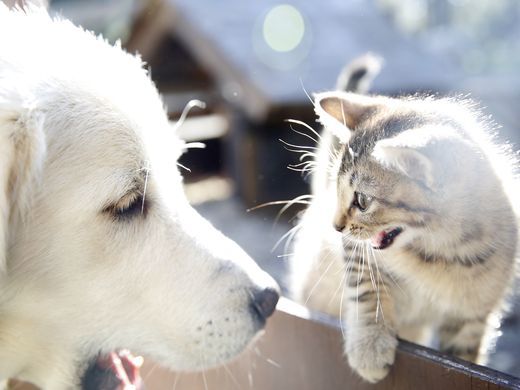 Nearby, a cat crawls matter-of-factly onto a visitor’s shoulder. 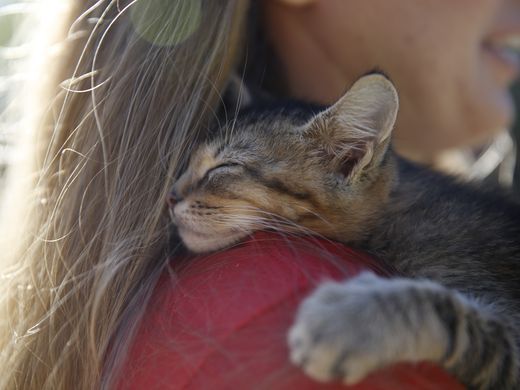 And in the distance, children are watering the pigs and mucking the stable of a very hairy Highland cow. 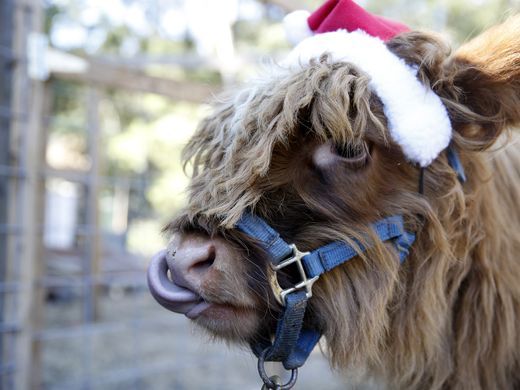 “After we got married, my husband began “climbing the corporate ladder,” Shannon says. “We bought a big house in Southwood, I worked at an animal welfare and rescue shelter — which I loved, and we’d begun to adopt our children. We had a great house, great cars, a great life… right before the financial crisis of 2007-8. And it hit us hard.” Suddenly, the adjustable rate mortgage couldn’t be paid; the house went up for a short sale; the fancy cars were gone. And the Carrolls found themselves and five children living in a 600-Square-foot loaned trailer in Havana. 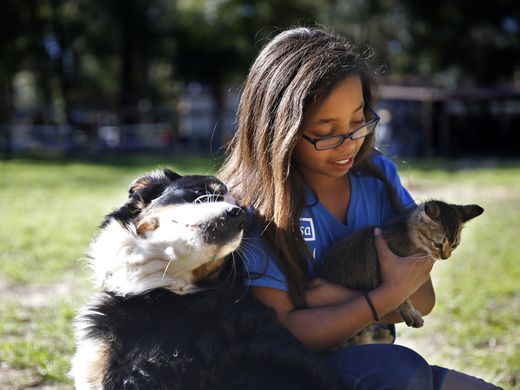 There’s a commotion nearby, and a tiny brown pig, called Kiwi, interrupts with a series of squeals. His best friend, Annie, a Bernese Mountain Dog stares gently at him, seeming to advise patience as one of Shannon Carroll’s children pops a little Santa hat onto Kiwi’s head. 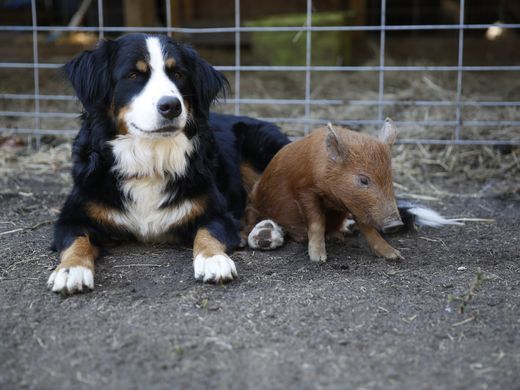 Soon he’s running off, looking himself like a character from an Orlando Disney movie. Shannon smiles. She’s used to little interruptions; quickly assessing if “man or beast” is immediately in need. 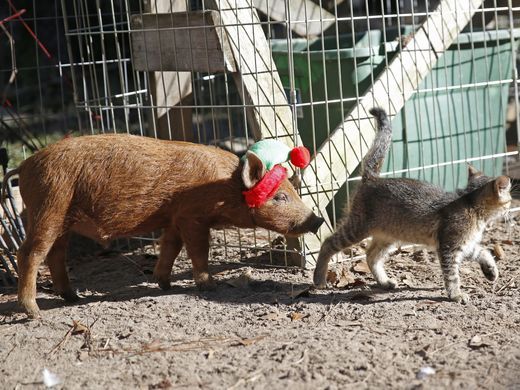 “It was about this time that we became true Christians,” says Shannon. “Almost by accident. We saw a Christian program on TV, then my husband began to read, to talk with others. I was initially opposed. I didn’t want to be ‘saved.’ I didn’t want a God who would be limiting, who would take the fun out of life. But over time, I saw my husband change before my eyes. I saw the living God in him… and I thought that if this is real, I will surrender as well.” 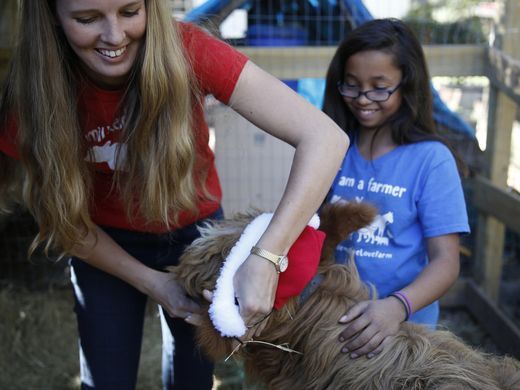 They both gave their lives to Christ and now attend Grace Church in Tallahassee. Shannon says that the theme of debt, the precursor to their spiritual change, remains very real in their lives. “We were in debt and we’ve repaid it. Christ paid a debt too… for our sins.” She says that because of that fact she and her husband feel freed — "free to give and free to love.” 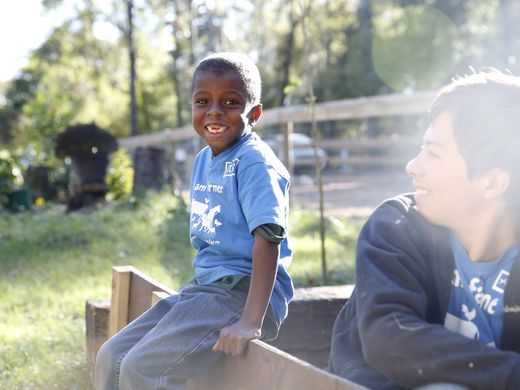 Soon, Risa, 11, whose chores are “training the ponies and watering the chickens and cats,” 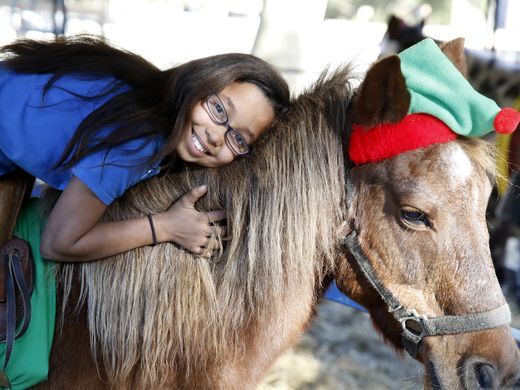 and her sister, Mirabel, 14, who teaches riding, loves the goats and wants to be a “dolphin trainer or run an exotic animal farm in Australia,” are explaining how some of the ponies are trained to pull a small white cart and will eventually be placed with other families. 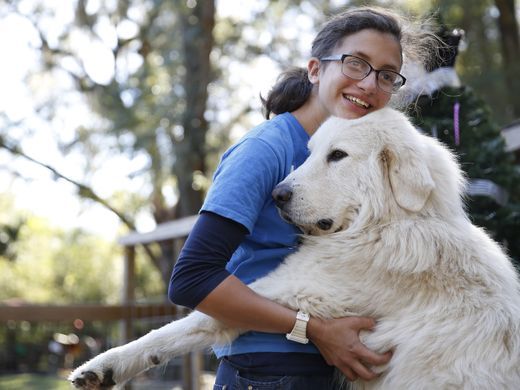 Anthony, 15, fresh from his job of “scooping poo,” smiles over at his favorite pig, Melon, and says that in the future he hopes to be in law enforcement. Sam, 11, who watches over the ducks, chickens, and smaller pigs still likes the dogs best. Inside, Titus and Maggie, both age 6, are studying with a sometimes tutor. Brittney, 13, attends Gretchen Everhart School. 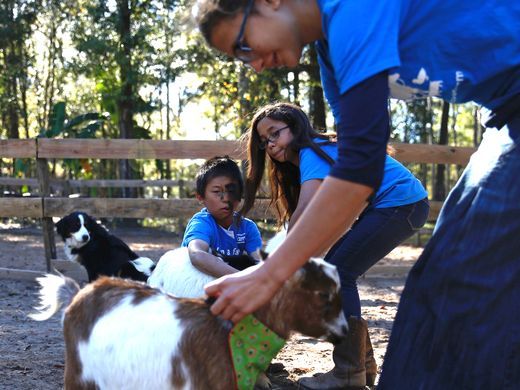 For the most part, however, Shannon Carroll is not only mother, presider-over of the farm, foster mother to orphaned and sick animals, but a home-school teacher as well. 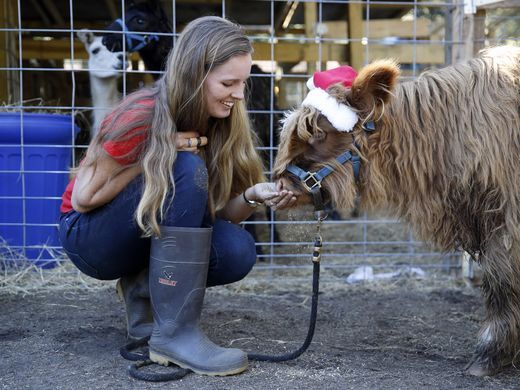 “A day in our life is actually pretty well organized,” smiles Shannon. “Up by six-thirty to get Brittney on the bus. Children’s chores over by about eight. I milk the cow. Sit-down school for three hours and a project for another three hours… each child has a project that must have a goal.” In fact, the Carrolls see all people and animals as needing to have a purpose on the farm: even the animals. 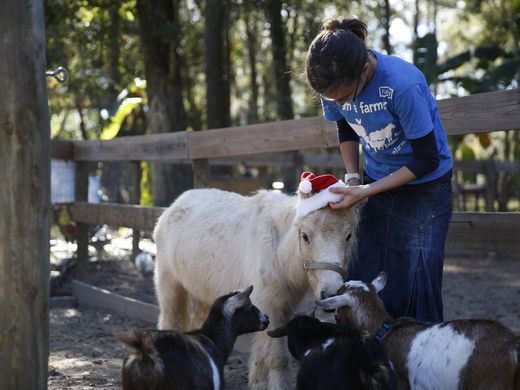 “The two draft horses will be trained to pull carriages for weddings. Obadiah was an Amish carriage horse before, the other, used by guards in the Texas fields to watch over prisoners. Both were headed to the slaughter-house before we adopted them,” said Shannon Carroll. Other animals, as many farm families accept, were purchased or bred for the purpose of feeding the family. And some animals just get the jobs that are fun. 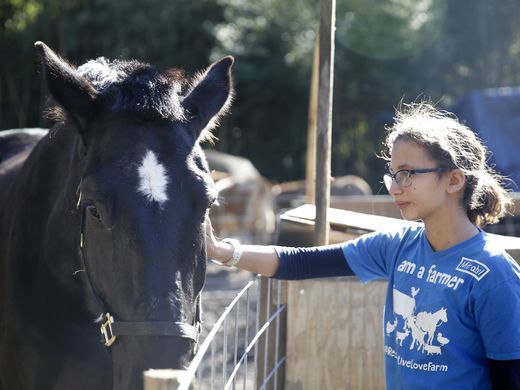 Shannon Carroll says that they purchased the seven-acre property in 2014, then, “Two years ago, we began having birthday parties here. Soon we were opening the farm as a ‘petting zoo’ on certain days. We let the children — and adults — watch me milk, then they get to try. The 11-year-olds run the petting zoo, where dozens and dozens of children can hold chickens, pet goats, stroke bunnies…. 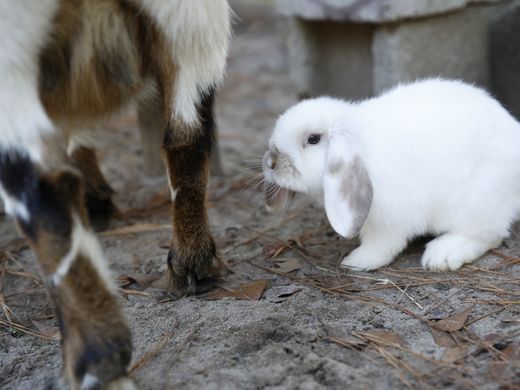 And at Christmas, we have costumes for children to wear for a picture near a manger with real animals circled around. 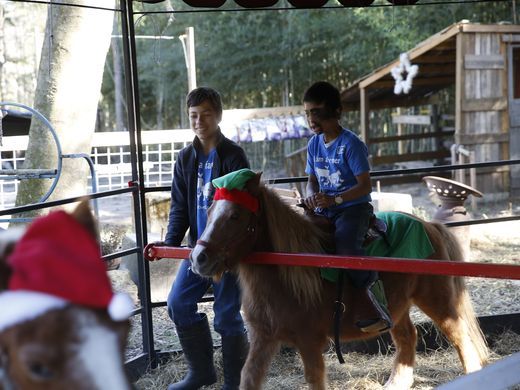 We also have a “merry-go-round” with ponies in their Christmas hats and a few white ponies who masquerade as unicorns! 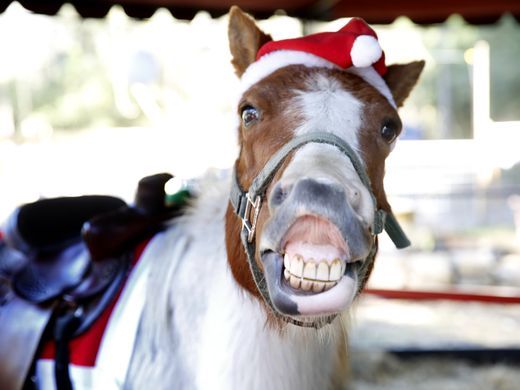 Even the llama and the alpaca get in the act.” 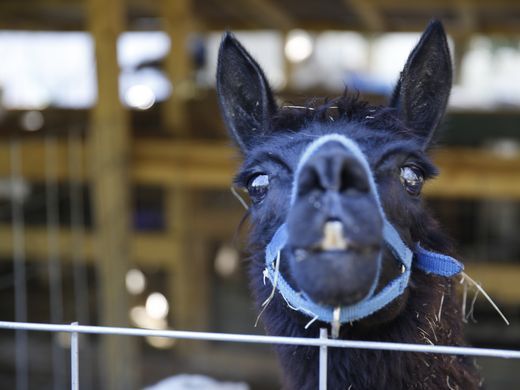 Brian Carroll, a quiet, smiling man, who is now Senior Director at Chick-fil-A, watches over his brood and the farm that seems to run like a very large, very diverse hive. Four cats, three llamas, four cows, seven ponies, four dogs, two donkeys, two draft horses, three sheep, five pigs, eight rabbits, a herd of goats, and more chickens, and ducks than will sit still to be counted… and seven amazingly self-possessed children who treat each other and each animal with kindness and respect. 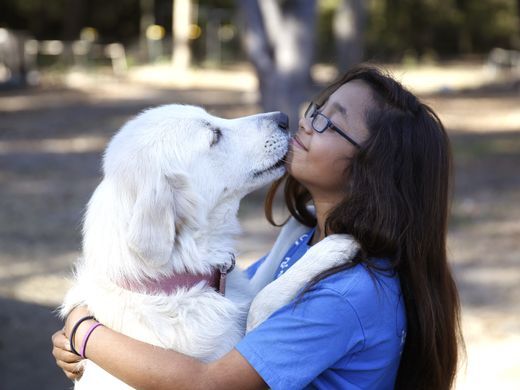 The seven rough acres that the Carrolls bought in 2013, that to some may still seem rough and imperfect, are in fact, something more. They are one family’s hand-made kingdom. One filled with work, love, giving, and peace. A place where lions would very likely lie down with lambs… be stroked by empathetic little hands, and then once they were family, be asked how they’d like to help out at the farm. 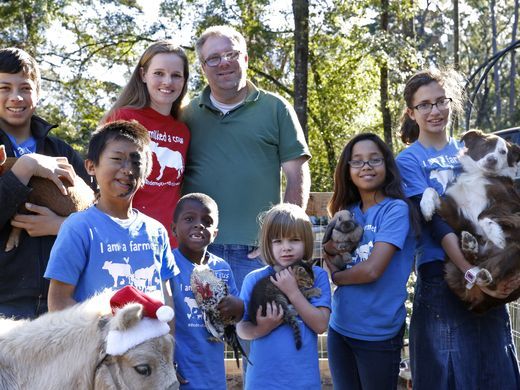 Visits to Redemptive Love Farms are free, though donations to feed and care for the animals are gratefully accepted. 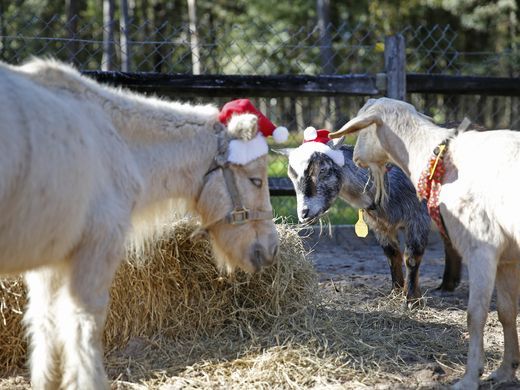 Where: 13800 Moccasin Gap Road, Miccosukee, 32309
Parties, photography sessions, riding lessons, and other events can be booked through www.redemptivelovefarm.com; 850-894-1800. 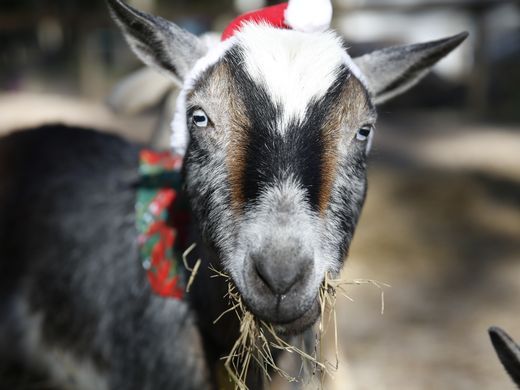 -Marina Brown can be contacted at mcdb100@comcast.net and Marina Brown Author on Facebook